Basketball is back in Trebinje 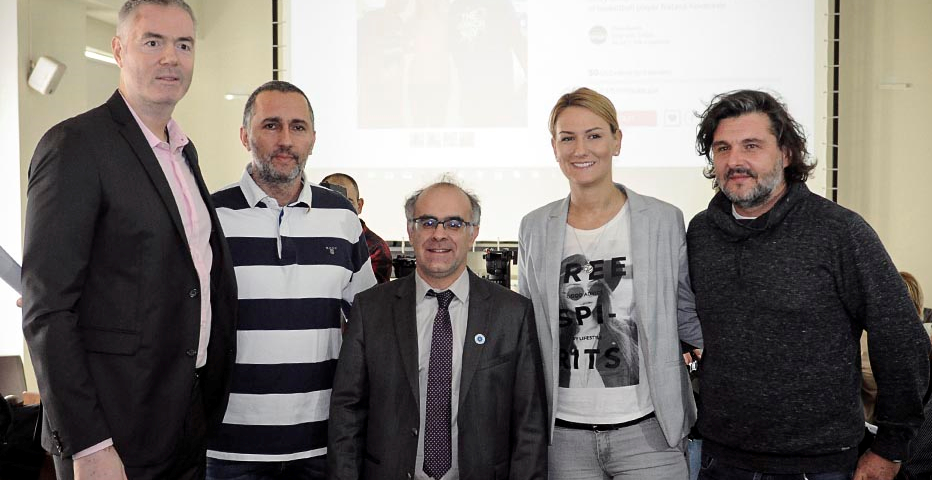 A press conference was held today marking the launch of a unique crowdfunding campaign for collecting funds to be used for finishing of the last stage of a documentary film “The Leap” about Natasa Kovacevic, constructing and placing of a monument preserving a memory of Serbian basketball legends and roots of sport friendship between Serbia and France, as well as for the project launched by “Natasa Kovacevic Foundation” (basketball school for girls).

Link to the Indiegogo crowdfunding platform where all those interested in the project can give their financial support:

https://igg.me/at/filmSkokoNatasiKovacevic (by clicking “BACK IT” at the top of the page, next to the cover photo/video).

The press conference held in Jugoslovenska kinoteka was first addressed by Natasa Kovacevic (founder of “Natasa Kovacevic Foundation), followed by Charge d’Affaires of the Embassy of France in Belgrade, Nicolas Faye, Serbian Basketball Federation (KSS) Secretary General Dejan Tomasevic, “The Leap” movie director Ivica Vidanovic, and movie “Jump” screenwriter Aleksandar Miletic, while French Basketball Federation President Jean-Pierre Siutat addressed participants by a special video message. Before the beginning of the press conference a trailer from the movie “The Leap” was also shown for the first time.

Natasa Kovacevic stressed that the movie is not just her life story, but also a “story about French-Serbian friendship.”

“Some people see the movie about me as a great victory. Some see it as a story about the courage. This movie, however, is a simple story about people. When I was offered two years ago to have a feature-length documentary about me, I accepted it first and foremost to send a message. The movie shows how people in the most difficult of times may offer the greatest values. I had a great fortune to be backed by institutions, like Serbian Basketball Federation and Red Star Basketball Club. Their support gave me strength and wind in my sails. I also received a great support from the French Basketball Federation and Jean-Pierre Siutat,” said Natasa Kovacevic.

Movie director Ivica Vidanovic said that “The Leap” is almost finished, but that more funds are needed for finishing of the shooting and transferring to the postproduction stage.

“Almost two years have passed since we started making this movie. This is a very emotional movie and describes a huge struggle which represents a great inspiration. This is a feature-length documentary movie made over a very long period. It involves many stages in Natasa’s life. I think we have a very emotional movie speaking about great human struggle and I expect that it would be really good and that audience would love it,” stressed Ivica Vidanovic.

“The Leap” screenwriter Aleksandar Miletic pointed that this movie was made in several countries, and that there was intentionally no rush with this project, so the quality could be preserved.

“The story about the movie started from the triangle including French Basketball Federation, our production crew and Natasa Kovacevic. FIBA got involved later, followed by the Basketball Federation of Serbia, when all this process became much easier. There are many people in the shadows which helped us in telling this story the way we wanted. We, as the movie authors, as well as Natasa, were very ambitious when it came to this movie. Maybe we could have done things faster, but certainly not better. We decided to make this story personal, about Natasa Kovacevic, but also about the friendship of basketball federations of Serbia and France,” said Aleksandar Miletic.

“I met Natasa after her surgery and asked myself this question: Why God allowed for such great career to be cut short like this? I wondered why Natasa wouldn’t win any club and national team championships, which she would surely win. I soon realized that God obviously had different plans for her, much greater than the basketball itself. In the meantime, Natasa finished two faculties, became FIBA ambassador, promoter of the European Basketball Championship which will be held in Serbia, she is opening basketball schools for children, making a movie, connecting Serbian and French people…,” said Dejan Tomasevic.

Charge d’Affaires of the Embassy of France in Belgrade, Nicolas Faye, said that many people in his country “greatly admire Serbian sportsmen and sportswomen, especially Natasa Kovacevic.”

“I am glad for being given the opportunity to support collecting of funds for finishing of the movie ‘The Leap.’ I am also glad for being able to support construction of the monument which will tell the story of friendship between Serbia and France. However, one cannot be concerned only about relations between the countries, but also about friendship between people, which can be seen through sport and many other ties. We shall see how we can assist the work of ‘Natasa Kovacevic Foundation’ and shall continue promoting positive values generated through sports,” concluded Nicolas Faye.

Unique crowdfunding campaign which was launched today at 14:00 hours is comprised of three segments:
• Completion of the shooting process (17 shooting days: France, Spain, Serbia…) and “The Leap” movie postproduction;

• Construction and placing of a monument preserving the memory of Serbian basketball legends, but also the roots of sport friendship between Serbia and France;

• Project launched by “Natasa Kovacevic Foundation” – basketball school for girls in regions where this is necessary.